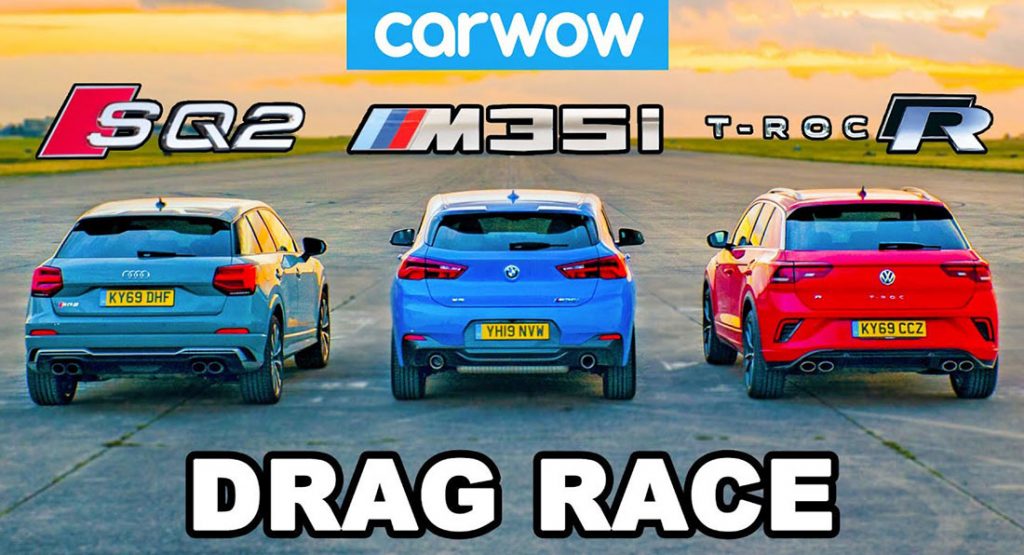 While absolutely crazy performance SUVs like the Jeep Grand Cherokee Trackhawk and BMW X5 M Competition offer up the kind of acceleration that can rip your face off, you can still have a huge amount of fun in less powerful SUVs likes the Audi SQ2, BMW X2 M35i, and VW T-Roc R.

During one of its most recent comparison tests, CarWow put these three alongside each other for a series of performance tests and as the stats would have you believe, the trio are very evenly matched.

The Audi SQ2 shares much of its DNA with the T-Roc R and is powered by a 2.0-liter turbocharged four-cylinder that produces a total of 296 hp and 280 lb-ft (400 Nm) of torque. This engine is paired with a seven-speed dual-clutch transmission and all-wheel and according to the German marque, the SQ2 can hit 62 mph (100 km/h) in as little as 4.8 seconds.

Watch Also: Time To See What The Audi SQ2 Feels Like From Behind The Wheel

Similarly, the BMW X2 M35i also features a 2.0-liter turbocharged four-cylinder churning out 302 hp and 332 lb-ft (450 Nm) of torque that is coupled to an eight-speed automatic with all-wheel drive and will hit 62 mph in 4.9 seconds, according to BMW. Last but not least is the VW T-Roc R, fitted with the same 2.0-liter turbo four as the SQ2 and producing 296 hp and 295 lb-ft (400 Nm) of torque. It too features all-wheel drive and a seven-speed dual-clutch transmission.

In the drag race held between the two, all three finished the quarter-mile in 13.4 seconds but you’ll have to watch the video for yourself to see which actually crossed the finish line first – plus, how they fared from a rolling start race.

2020-06-14
Previous Post: Aston Martin Valkyrie’s V12 Was Spawned From A Three-Cylinder
Next Post: 1 Of 1 Ferrari 488 Pista Painted In ‘Verde Francesca’ Is Stunning