After a revealing teaser campaign, Mercedes has released details about the GT Black Series.

Besides the flat-plane crank, the engine has been outfitted with new camshafts, different exhaust manifolds and a dry sump lubrication system.  The engine also has a new firing order, larger turbocharger compressor wheels and a heck of a sound.

The engine is connected to a seven-speed dual-clutch transmission which has been reinforced to cope with the additional torque. This setup enables the rear-wheel drive model to rocket from 0-62 mph (0-100 km/h) in 3.2 seconds and run from 0-124 mph (0-200 km/h) in less than 9 seconds. If drivers keep their foot planted, the car will eventually hit a top speed of 202 mph (325 km/h).

Like the AMG GT R, the model has a coil-over suspension and an adaptive damping system.  The car also features adjustable anti-roll bars and an adjustable camber.

Elsewhere, engineers installed carbon fiber shear panels, a lightweight integral carrier and a carbon fiber tunnel cross to stiffen up the body.  The model also has a ceramic braking system with motorsport pads and discs that are “optimized for fade resistance and temperature stability.” 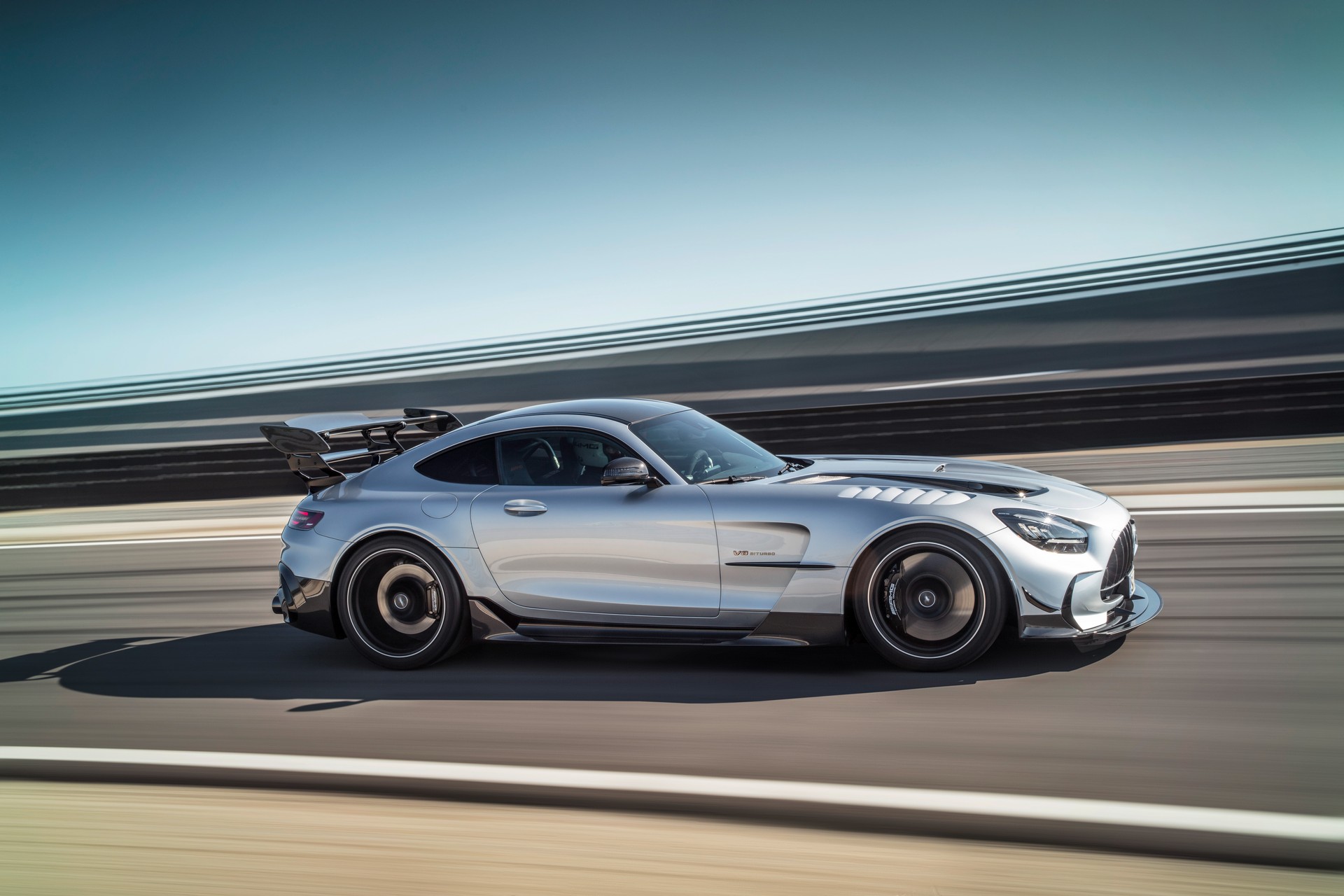 On the styling front, the Black Series draws inspiration from the GT3 and GT4 race cars.  As a result, the model adopts an aggressive front fascia with a larger grille, an adjustable splitter and carbon fiber canards.

Other notable features include a carbon fiber rear bumper and a four-tailpipe sports exhaust system which is separated by a wide diffuser.  The model also has thinner front and rear glass as well as 10-spoke forged wheels with a matte black finish.  The latter measure 19-inches front and 20-inches rear, and are wrapped in bespoke Michelin Pilot Sport Cup 2 R tires.

Thanks to all these modifications, the Black Series generates “well over” 882 lbs (400 kg) of downforce at 155 mph (250 km/h).  We can also expect some weight savings, but the company didn’t mention numbers.

Customers looking for something more unique can order the optional AMG Track Package. It adds four-point harnesses, a fire extinguisher and a lightweight titanium roll cage.  Unfortunately, the package will only be available in select markets and the United States won’t make the cut (Americans also have to make do with AMG Performance seats).

The most interesting interior feature is a small knob known as AMG Traction Control.  It allows for plenty of fun as it offers nine levels of rear axle slip.  Level 1 is designed for driving in wet conditions with “high safety reserves,” while Level 9 allows for maximum slip and tire annihilation.

There’s no word on pricing quite yet, but we can expect it in due course.